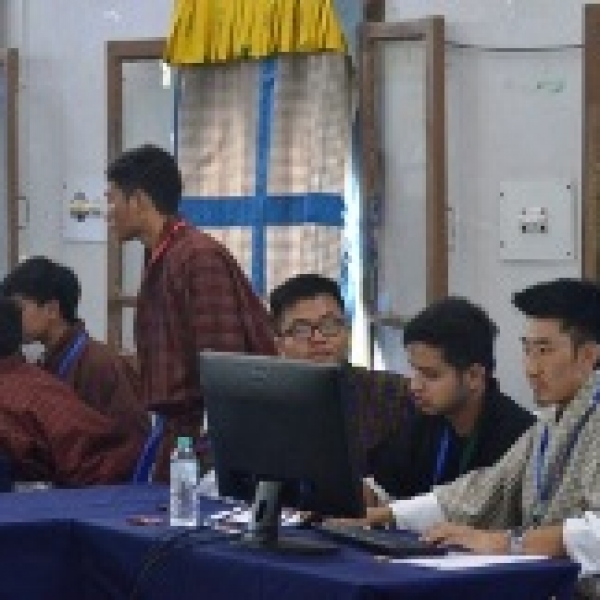 Events 28 June 2019
The  Intercollegiate Programming Contest (ICPC) 2019 was the first ever Programming Contest conducted in the nation organized by RUB ACM Student Chapter on 18 May, 2019.
The participants were in teams, in members of three from the following colleges:
1. Gyelposhing College of IT (3 teams)
2. Jigme Namgyel Engineering College (1 team)
3. Royal Thimphu College (3 teams)
4. Sherubtse College (5 teams), and
5. College of Science and Technology (10 teams)
The event was graced by the Superintendent of Police, RBP, Phuentsholing as the Chief Guest, and guest speaker, Mr. Arpan Lepcha, Chief Technical Officer at SELISE Bhutan.
The event successfully ended with Team “No One” from CST winning the contest, followed by runner-up team “Code Assassin 2.0” again from CST. The second runner-up was team “Code Jedi” from Sherubtse College.
A rolling trophy was awarded to the winning college, along with cash prizes for the top three teams.
The ACM Chapter at CST aims to promote programming in the community with such events, and also, prepare the University Students to compete in Regional ICPCs, and ultimately at the global stage, the ACM-ICPC, in the coming years.
The final scoreboard standings of the contest can be accessed at: domjudge.cst.edu.bt

To download the workshop photos, please visit the following link: